National statistics show the national average of people injured or killed by an impaired driver is 65 deaths or injuries per hour. That is over 1 casualty per minute.  Alcohol related crashes in the United States cost the public an estimated $114.3 billion in 2000, including $51.1 billion in monetary costs and an estimated $63.2 billion in quality of life losses. People other than the drinking driver paid $71.6 billion of the alcohol-related crash bill, which is 63 percent of the total cost of these crashes.

The charts below show the different stages of impairment, when drinking alcohol and also; if you are arrested for Operating under the influence, the cost of expenses incurred. 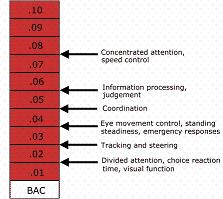 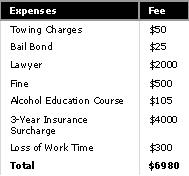 Every police officer, graduating from the Police Academy, is trained in administering the Standardized Field Sobriety Tests (SFSTs). These tests include the Horizontal Gaze Nystagmus Test (Checking the subject's eyes for impairment.), the Walk and Turn Test, and the One Leg Stand Test.  Officers may do other types of field sobriety tests also.

The first method and most popular is using a breath analyzing instrument called the Intoxilyzer 8000.

The second method is by having someone trained in drawing blood and having the sample sent to the lab.

Every police officer that graduates from the Maine Criminal Justice Academy is certified as an Intoxilyzer 8000 Operator.

The South Portland Police Department also has one police officer who is a certified Law Enforcement Phlebotomist and is trained to draw blood samples for OUI purposes and is certified by the Maine Department of Health and Human Services: Ofc. Jessica Ramsay. Ofc. Ramsay has to recertify every 2 years.

If the police officer believes that an operator may under the influence of a drug, other than alcohol, he calls for a specially trained police officer able to evaluate the operator for type of drug category impairment or a possible medical issue. These Officers are called Drug Recognition Experts.

Drug Impairment Training for Educational Professionals (DITEP)- This is a two day program that trains educators and medical personnel to evaluate students impaired by drugs in a school setting.

For more information or questions please contact any officer below either by e-mail or phone: